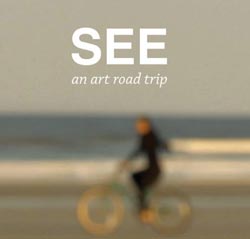 Available on Amazon
and iTunes

Seven years in the making, “SEE” is a poetic art road trip, hosted by two contemporary artists who take off across the country to see art sites and meet artworld characters and luminaries.

Bo Bartlett and Betsy Eby are both nationally recognized painters, and they are husband and wife. In 2006 the idea to make a movie about seeing the beauty of America came when America wasn’t looked upon too keenly by the international community. Through artists’ eyes, they wanted to convey the America they saw and to offer up the idea that art is everywhere, you just have to open your eyes to it. Their idea began as a fictional story about a couple who stumble from site to site, being do-gooders along the way. But as the movie progressed, they realized the poignancy of the material didn’t need a fictional artifice as it evolved into a poignant moving meditation about the beauty in this world and the art of seeing. But mid way through the making, Bartlett’s eyesight begins to fail.

SEE takes you to Robert Smithson’s Spiral Jetty in the Great Salt Lake, the popular Mt. Rushmore, the vacant burial grounds of Wounded Knee, to New Orleans and the deep South, the quilters of Gee’s Bend, and conversations with outsider artists at the Doo Nanny, a folkart festival in Seale Alabama. Up the Eastern Seaboard, A Whitney Bienniel, studios of Norman Rockwell and Winslow Homer. It takes us to the site of Edward Hopper’s lighthouse, Two Lights, and Andrew Wyeth’s famous Christina’s World before meeting Andrew Wyeth himself, accompanied by his famous model Helga. They share an afternoon conversation, lunch and blueberry pie.

But during this moving art road trip, we become privy to the fact that Bartlett is struggling with his vision. Through his journal entries it is revealed that his eyesight has become blurry as if there’s snow in his visual field. And the movie takes us through the process of discovery and diagnosis and the worry that he may never see again. The film ends as Bartlett goes into brain surgery, leaving us to ponder the outcome and grateful that we can see the beauty in the everyday world around us.

“SEE” is an original film about seeing, art, America and love.

“SEE” is directed by Bo Bartlett, Betsy Eby and Glenn Holsten. Bo Bartlett and Glenn Holsten are both Pew Fellows. They have collaborated on a number of films including “Kiss The Moon”, “Ben Kamihira” both underwritten by the Pew Foundation for WHYY in Philadelphia. They have also collaborated on award winning “Snowhill,” a documentary about the life and art of Andrew Wyeth, produced by Betsy Wyeth, and “Heartland”, the biography of Bo Bartlett which accompanied his traveling retrospective in 2004.

Bartlett received a Certificate of Fine Arts from the Pennsylvania Academy of the Fine Arts and a Certificate in Film Making from NYU. Bo Bartlett is a visual artists, has had over 50 solo exhibitions and has paintings in museums around the country. Glenn Holsten is a documentary film maker who live and works in Philadlephia.

Betsy Eby graduated with a BFA in Art History from the University of Oregon. She is a painter and classical pianist. She has had over 25 solo exhibitions and has work in museums across the country. Her museum exhibition “Painting with Fire” opens in the fall of 2013 and will travel to the Center for Maine Contemporary Art in the summer of 2014. A monograph will be published in collaboration with the exhibition.
SEE - an art road trip